Legion and the iteration of design 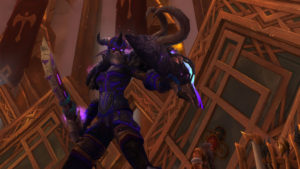 One of the things that hits me every time I accidentally use my Garrison Hearthstone (or deliberately — it’s an easy way to get to the portals in Stormshield) is that my Garrison is basically my Order Hall, but a more primitive version of it. The Order Hall works better because there are more variety of them depending on what class you play (so Paladins get a different experience from Priests or Warriors, as one example) and also because it lacks the sheer volume of resources you could gather, thus not essentially trapping you in your Order Hall.

But then I started to think about Draenor’s Objectives — those regions of the world that you would go out and kill a bunch of stuff in order to fill a bar and then collect a bunch of Apexis for your trouble. And of course it’s not hard to look at this and say wait, this is just a poorly executed World Quest. This conviction gets even stronger when you look at Tanaan Jungle, or ‘Timeless Isle 2.0’ and start to compare it to Suramar or indeed any zone once you’ve hit max level, or the upcoming Broken Shore for patch 7.2. In essence, this isn’t surprising — World of Warcraft has always been based on the concept of iterative design, where lessons learned are applied forward. But Warlords of Draenor has such a bad reputation among players (it wrested the worst expansion ever crown away from Cataclysm) that I think it behooves us to look at ways in which Legion wouldn’t be the expansion it is today without it.

The Order Hall vs. Garrisons

One of the biggest problems with the Garrison was that it replaced gathering professions. With a mine and an herb garden and the barn you could essentially ignore skinning, herbalism and mining entirely, and just gather resources. You could also fish there, many players used the Salvage Hut to generate greens and occasionally old epics for the Transmog market on the AH, and in general between that and the astonishingly robust mission table and its obscene gold generating potential if played right there was almost no need to ever leave the Garrison.

On the face of it, the Order Hall is a broken down shell of what the Garrison was, lacking all of these features save a much more minimalist mission table. But it trumps the Garrison in several key areas. First, each class gets their own Order Hall, meaning that it’s less repetitive if you’re playing several alts — your Mage won’t get the exact same experience as your Warlock. Instead of 2 Garrisons, we have 12 Order Halls. But more importantly, its the very lack of all those features that makes the Order Hall work — it serves as a facilitator, a place where you return to, spend your Artifact Power, throw a few missions up on the table and then move on to actually adventuring in the world.

Blizzard’s iteration on Warlords here was a simple one — they learned that it’s possible to make a feature too compelling, to the point where all alternatives are useless. The problem with the Garrison was, it made doing anything else pointless. The Order Hall doesn’t. 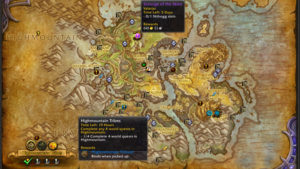 The Development of World Quests

Warlords sent you out to do one quest a day, which meant going into one zone, and filling up a bar doing various things in one place in that zone. World Quests take this basic idea and expand on it in every possible way – the Emissaries motivate you to do them without forcing you to do them every single day (since you can have up to three Emissaries at a time, you can miss a day or two and not feel penalized) while the quests themselves allow you to pick and choose what you want to do in a zone and if you’re not going for an Emissary at all, you can decide between quests. If you want to scan for WQs that only grant Artifact Power, or Gear, or Gold, you can do that. Are you desperate for Order Hall Resources?  You can do that, too.

The World Quest system is heavily influenced by other games like Diablo 3 and Hearthstone, but it also hearkens back to Daily Quest hubs like the Isle of Quel’Danas, folding previous iterations of World of Warcraft (such as the expansive system we saw in Mists of Pandaria) into the mix. It’s fascinating to see how much more varied it is than the old system from Warlords.

It must be said that it’s very clear that Blizzard learned that whatever decisions they make in regards to flying in an expansion, communication is key. The Warlords approach of not really telling us what they were doing for quite some time gave the impression that they didn’t know what they were doing (true or not, that’s the feeling it created) and we’ve definitely seen Blizzard improve on that in Legion. Whether you’re happy or sad with waiting for patch 7.2 to fly, it didn’t come as a surprise to anyone and you were able to work on Broken Isles Pathfinder from day one if you wanted to.

This is the big lesson of Warlords, I think. Whatever you’re planning, make sure the players know and understand it up front.

The Timeless Isle is actually another example of places like the Burning Crusade zones Ogri’la and the Isle of Quel’Danas. And Tanaan clearly owed a debt to all of them, with its multiple zone objectives and random rare spawns to hunt. In my opinion the reason players got tired of Tanaan was less to do with the zone itself and more to do with the fact that the zone was basically it for content outside of the raid for well over a year. Suramar as a max level zone defeated this through several design improvements — a long quest chain that unlocked more content as it progressed, a day one World Quest system (the same one that appears in other zones, to be fair), the breadth and depth of Suramar City and the zone as a whole, and the fact that if you got bored or frustrated in Suramar, you could go somewhere else.

Legion‘s iteration on open world solo/small group content has been the most successful I’ve ever seen because it takes the idea of places like Quel’Danas, the Timeless Isle or Tanaan and it makes every zone do that job. There are five Legion zones, and each has a chance to be an Emissary (plus the Wardens and Kirin Tor) which will send you to that zone  to do World Quests. Each zone has things to do, and they all vary — the ‘fill a bar’ from Warlords is there for some WQs, but not all of them.

The biggest lesson here seems to be that players need variety to keep their interest.

Legion‘s design is highly iterative, to the point where you can basically sit down with any aspect of it and call out predecessors in World of Warcraft. As our own Anna Bell stated to me, the Artifacts feel like an improved version of old Vanilla WoW talent trees. The quests that unlock and empower them have elements of the Mists and Warlords legendary capes and rings. The various scenarios we’ve seen as we’ve progressed through the story are a Mists of Pandaria design element. This expansion wouldn’t exist without its immediate predecessor — it improved upon pretty much every element that expansion had — and it does so by looking back over 12 years of game design.

If you like Legion, it’s because you like what came before it. Iterative design is all about learning from the past versions of the process, what worked, and what didn’t. In that regard Warlords serves as a very valuable test bed.