Capturing the authenticity of the final frontier

When I got the opportunity to work as narrative designer on the upcoming PlayStation VR game Star Trek: Bridge Crew from Red Storm Entertainment, a Ubisoft studio, I knew I was in for the project of a lifetime. Who wouldn’t be excited about working on a brand new platform, developing a game unlike anything we’d ever made before, and using one of most beloved franchises of all time? So much frontier!

In fact, the development process for Star Trek: Bridge Crew was an awful lot like an episode of one of the TV shows; a whole crew of talented individuals encountering never-before-seen challenges, and finding creative solutions with science. (Except we never had to beam anyone down to dangerous alien planets. Even though there were plenty of times we wanted to.)

Star Trek: Bridge Crew is a co-op PS VR game, enabling up to four players to serve as the critical officers on the bridge of a brand new Federation starship, the U.S.S. Aegis, as well as the iconic classic bridge of the U.S.S. Enterprise. Players can choose the role of Helm Officer, Tactical Officer, Chief Engineer, or, of course, Captain. Though it can be played single-player, we designed the game primarily with a social, cooperative experience in mind.

As the principal writer on the project, I knew there were going to be some surprises along the way, and some lessons to learn as we made the leap from more traditional game development into the relatively unknown space of social VR. If I were to write a post about all the things we discovered, it’d be too long for anyone to read. But here are three quick highlights:

Often times as game developers, we’re concerned about making sure players always have enough going on to keep their interest. Whether that’s through the high-octane tension of Tom Clancy’s Rainbow Six: Siege, or the wealth of gameplay opportunities of an Assassin’s Creed or Far Cry, keeping players engaged is a critical part of game and narrative design.

With the power of social presence in VR, though, we found with Star Trek: Bridge Crew that we had to give players the time and space to fully appreciate the whole experience. Sometimes we found ourselves wanting to put more pressure on players, to shorten the distance between objectives, or to reduce the time players had to make a decision.

But hands-on player testing helped us discover just how much we needed to slow down.

When you first load into Star Trek: Bridge Crew’s main menu, you start in an inspection shuttle, following a short orbit around the beautiful U.S.S. Aegis in dock at a space station. When we first started showing the game to the public, it wasn’t unusual for players to spend five minutes or more just sitting in that shuttle, staring out at space. In fact, one of our guys who ran a lot of demos said not once, but twice, players had to pause to wipe tears from their eyes.

And this was just our main menu.

The sense of presence, of actually being there is so strong in VR, that we as developers had to keep reminding ourselves to make room for our players to just enjoy the thrill of being on the bridge of a starship.

The All Seeing Eye/Talking Head is a fairly common mechanic games use to make sure players know what they need to do to accomplish game objectives. (You know, the guy who calls in over the radio and tells you that the room you’re in is on fire and you need to find a way to get out.) But in a shared, virtual environment we found that the experience of having a talking head on the screen wasn’t compelling enough, and didn’t really feel right for the Star Trek franchise.

In Star Trek: Bridge Crew you are, after all, supposed to be an expert crew, entrusted with a starship. It just didn’t seem right to have a Starfleet Admiral constantly showing up on your viewscreen, reminding you of everything you were expected to do.

To that end, we decided to lean heavily on the Captain player as our primary method of communicating mission objectives. Through an interface on the Captain’s chair, the Captain keeps track of everything it takes to accomplish a particular mission, and is responsible for communicating all the relevant information to the rest of the crew.

In addition to mission requirements, however, the Captain also receives information about different ways objectives might be accomplished. In some cases, the crew is faced with decisions that have no clear right answer, and it’s up to the Captain to make the call that seems best to them.

We’re putting a lot of faith in our captains, but it seems to have been the right call; when we’ve given demos, it’s been a beautiful thing to see four complete strangers come together as a crew under the command of a decisive Captain. 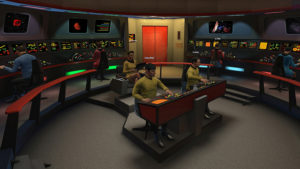 The Star Trek franchise often centers on the interaction of various experts, and we wanted to make sure that our players got that experience, even if they’d never seen a single episode or movie before. To that end, we spent a lot of time designing each officer’s station and crafting the language we used on our Captain’s information panel so that when players are talking to each other, they have a shared vocabulary that makes it easy to communicate, while also sounding authentic to the franchise.

We have, for example, a specific protocol that players follow to take the Aegis and Enterprise to warp. The Engineer is responsible for providing enough power to the engines, and then starting a process to charge the warp coils. The Helm Officer plots a course and then aligns the ship with the proper vector. But the warp coils can’t hold their charge forever, so the Captain needs to coordinate the process to ensure that everyone does the right thing at the right time. It’s an easy process when you’re just hanging out in Federation space. It might be a little more stressful when you’re trying to rescue civilians while being attacked, and also trying to escape a star that’s about to explode.

Each of the individual actions is simple, but combining each of them together into a process, and wrapping the actions in language that sounds like classic Star Trek really make for a convincing experience when the crew is working together.

There are many other things we learned over the course of developing Star Trek: Bridge Crew, but hopefully this brief overview gives you an idea of just how exciting the future of VR is. It truly is a new frontier, and I’m looking forward to seeing all the great things that we’re going to discover.