The co-founder and CEO of Blizzard Entertainment, Mike Morhaime, is a huge fan of esports. Last week he flew out to IEM Katowice to watch the StarCraft 2 and Heroes of the Storm tournaments being held there. We got to have a chat with him about Blizzard’s development process, the future of esports, his favourite moments in the history of StarCraft, and—ahem—which Overwatch characters he ships.

PC Gamer: As of late, Blizzard have taken to new genres and applied their style and knowledge to fixing many problems within them. Heroes of the Storm speeds up the MOBA genre, Hearthstone made card games accessible and fluid, Overwatch took the team based shooter and added style, even the co-op commanders in StarCraft 2 add something new to the experience. Do you feel that style of development represents Blizzard’s ethos now?

Mike Morhaime: I think it’s sort of a continuum of what we’ve always been trying to do, which is we start from a foundation that we know is going to be fun, and then we try to innovate from within that. I think it starts from having a team of developers that are passionate players themselves, so everybody’s always thinking about what they would want to play, and then how do we realise that.
The process at Blizzard is very iterative, so you don’t always know where you’ll end up when you start iterating. Some breakthroughs just happen along the way as you try things, some things work and some things don’t work and sometimes in fixing the things that don’t work you come up with some really creative new ideas and new ways of playing that end up being very meaningful to the game.

Where do you see this style of development going in the future?

You know, what I focus on at Blizzard is really just trying to create a safe environment that allows for creativity and risk-taking, for always trying to think of what is it that the game wants to be, what is it the game needs. You don’t always know where that’s going to lead, but when you have talented, passionate people that feel like they have the freedom to explore and be creative then great things can happen.

On diversity in esports

Yeah, I think this is an ongoing challenge that we have—to make the ecosystem more welcoming to non-male participants. I think it’s something the games industry in general has been struggling with. It started off really predominantly male and hopefully we’re gradually evolving over time to be more mixed and more diverse, but this is a topic that is very important to us at Blizzard and to a lot of other folks within the industry. I think it really starts from creating an environment that is welcoming and tolerant.

What do you feel is the best way to go about creating that sort of tolerant, welcoming environment?

I think it starts with how people treat each other. There’s a certain segment of the audience that just isn’t very nice to each other, and I think that that is a big, big turnoff to folks. I think we need to do a better job of self-policing ourselves to make sure that type of behaviour is not tolerated. 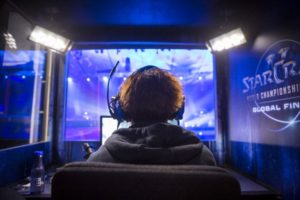 Going all the way back, do you have any favourite memories of StarCraft, its development, esports scene, or otherwise?

Yeah, I have a few memories. One of my favourite memories was the first time I visited Korea and visited a StarCraft 2 esports event. I was just blown away by the size of the crowd, the passion and excitement, the level of understanding that they had of the game.

I also remember when we had the GSL finals at BlizzCon and the finals ended up going very late, so everything else at BlizzCon had shut down and we still had this packed hall of people watching the GSL finals. It was packed from the front of the stage all the way to the back, people sitting in the aisles and everything. That was pretty, pretty amazing as well. It’s such a great feeling to have been involved in creating something and then feel the emotion of the audience watching top players do things in the game that you couldn’t possibly have imagined. It was amazing. 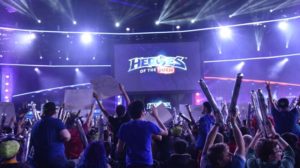 On Blizzard and amateur esports

Speaking of Blizzard games in general, many Blizzard games have focused rather heavily on bringing in an amateur audience, with Heroes of the Dorm and the Open Division for Heroes of the Storm, the Overwatch League, and so on. Can you explain what inspired this push towards more accessible esports?

Well I think it’s sort of the natural evolution of esports. If we want to reach a mainstream audience then I think just like regular sports you shouldn’t have to be a hardcore player of the game to enjoy watching the best players in the world play. Y’know, we would like to see esports evolve to be more accessible. I think it’s a path into gaming but we want it to be welcoming for people who either already love the games or maybe haven’t played at all and they can look in and still enjoy watching.

How do you plan on continuing to open up and diversify Blizzard esports in the future?

We view it as kind of a continuum if you look at the entire ecosystem, all the way down from your individual casual player to your amateur competitive player to all the way up to the top professional scene. We think that there needs to be something for everyone along the way so aspiring pros have a path to getting into the pro scene and potentially even making it a career. So we think about that.

Heroes of the Storm in particular has pushed heavily towards pulling amateur or even US college teams. How did Heroes of the Dorm come about?

It was really inspired by NCAA [National Collegiate Athletic Association] basketball, which every year has this amazing tournament where you bring all of these colleges together and in a very short time you have this exciting bracket that really engages folks across the country. You have a lot of affinity, in the US, to colleges, and I think that’s one way of making esports more accessible is having a starting point where there is some affinity.

If we say that Arizona State is playing Berkeley you know people understand that, and it’s different than two teams that maybe you haven’t heard of with players that you haven’t heard of. And I’m not sure what that looks like for the college scene outside of the United States, I think it’s a little bit more complicated to create something like that, but it is something that that we aspire to.

So, do you have any plans for further college-focused tournaments in Heroes of the Storm or otherwise? 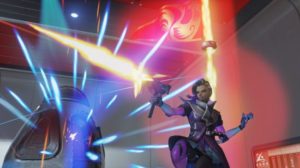 With regards to Overwatch esports, what do you see as its biggest barrier to growth?

Well, you know, I think with any sport, a lot of it comes down to some type of connection with the competitors, you know? And you see this with other sports, when you have very popular players that are doing very well, you tend to get a surge in popularity in folks following the sport. And so I think one of the things we need to do is we need to do a good job telling the stories, and introducing the competitors and what it takes to play at the top levels to the audience.
I think that some of the decisions that we made in terms of the approach for the Overwatch League is a little bit different. We’re going to have city-based teams, so, right off the bat you’ll have some affinity to locations around the world that I think will also be a pathway to fandom of particular teams and players. Then we just need to open that window into helping fans understand who they’re following, because there are real, interesting stories behind all of these players.

Would you say that those stories are going to be one of the focuses for Blizzard moving forward with esports in general, across all games?

I think that it has to be the focus for for telling the story of the Leagues. And if you look at other traditional sports I think they’ve done a really good job doing that. One great example I like to use is the Olympics, where you have the whole world every four years becoming big fans of these sports they don’t really follow, but in a really short period of time you end up meeting these very fascinating, talented people around the world, and learning a ton about them and then following them on this path in competition, in conflict, and all these amazing personal stories come out of that. I think that we really need to take a page out of that book and, and I think that’s a path towards engagement for the audience. 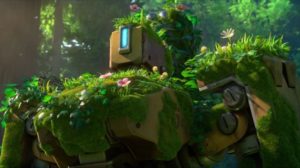 Who do you ship in Overwatch?

Who do I play?

Who do you ship?

Who do I ship? What do you mean?

Do you not know what shipping means?

I guess not! (Laughing)

Oh gosh. It’s a term online used for pairing characters who they think should be romantically involved.

(PR in the background: “Never heard of that before.”)

Y’know, I’m more of a consumer of those ideas than I am necessarily a creator. I mean, I can tell you that, yeah I mean this doesn’t answer your question but I’m a big fan of D.Va!

But the one that I end up playing the most is probably Bastion, who probably doesn’t ship along with anyone. (Laughs)

Is there anyone you’d partner D.Va with?

You heard it here first folks: Bastion doesn’t, er, ship. We’re sorry to those of you who are disappointed, but it’s official. Mike Morhaime said so.